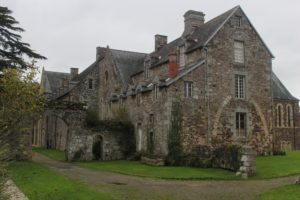 Today I heard the story of how a young priest from Normandy succeeded in restoring a magnificent abbey that had been destroyed on three previous occasions. Lucerne Abbey was founded in the mid 12th century and destroyed during both the Hundred Years’ War and then during the Religious Wars. During the French Revolution a wealthy local ship owner bought the abbey and converted it into a cotton mill. A viaduct was built to bring water onto the site for the machinery and trenches dug for the removal of the waste water. This was, literally, to be the abbey’s downfall. The trenches had been dug too close to the base of the pillars in the church and they began to crumble. The abbey was sold once again and extensively quarried. Pictures in the former gatehouse showing the sorry state of the church and abbey buildings, reveal the extent of the devastation.

Abbot Marcel Lelégard bought the ruins in 1959 aged 34 and his passion and dedication have produced amazing results. The church and refectory have been completely re-built. The dovecote, tithe barns, abbot’s house and grain mill have been restored. The Lay Brother’s house escaped too much damage and will be part of a future renovation project. Sadly, some buildings have disappeared – the dormitory, chapter house, sacristy and infirmary to the south of the church. Also, very little remains of the cloister. However, Abbot Lelégard’s vision continues today and the impressive ongoing restoration programme will no doubt breathe more life into the stunning abbey buildings for generations to come.
The abbey buildings are in La Lucerne d’Outremer which is between Granville and Villedieu-les-Poêles in Normandy. For more information visit www.abbaye-lucerne.fr

This site uses Akismet to reduce spam. Learn how your comment data is processed.