A Guide To The Bayeux Tapestry

The Bayeux Tapestry is an embroidered cloth measuring nearly 70 metres long and 50 cm high which depicts the events leading up to the Norman conquest of England. Characters include  William, Duke of Normandy, and Harold, Earl of Wessex, (later King of England), and culminates in the Battle of Hastings in 1066. 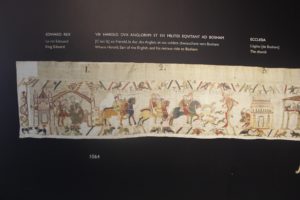 It is thought to date from the 11th century, within a few years after the battle. It was originally housed in Bayeux Cathedral but is now displayed in the Musée de la Tapisserie de Bayeux in Bayeux, Normandy. 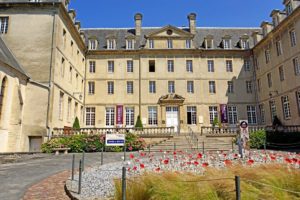 There are 58 scenes embroidered on linen with coloured woollen yarns and Latin descriptions. It’s not technically a tapestry as it is not woven but has predominantly been known as such. Two methods of stitching are used: outline or stem stitch for lettering and the outlines of figures, and couching or laid work for filling in figures. Nine linen panels were sewn together after each was embroidered and the joins were disguised with subsequent embroidery.

The main yarn colours are terracotta or russet, blue-green, dull gold, olive green, and blue, with small amounts of dark blue or black and sage green. Later repairs are made in light yellow, orange, and light greens. Laid yarns are couched in place with yarn of the same or contrasting colour. 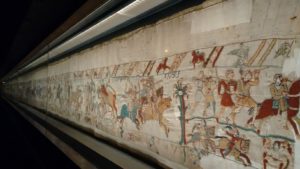 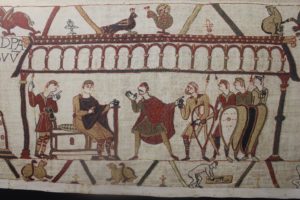 The earliest known written reference to the tapestry is a 1476 inventory of Bayeux Cathedral and there are two schools of thought about its origins. One is that it was commissioned by Bishop Odo, William’s half-brother, and made in England in the 1070s. However, French legend maintained the tapestry was commissioned and created by Queen Matilda, William the Conqueror’s wife, and her ladies-in-waiting. Subsequent analysis in the 20th century concluded it was probably commissioned by Bishop Odo who became Earl of Kent after the Conquest. There were three reasons for this conculsion: The first was that three of the bishop’s followers mentioned in the Domesday Book appear on the tapestry. Secondly the tapestry was found in Bayeux Cathedral which was built by Odo. Finally, it may have been commissioned at the same time as the cathedral’s construction in the 1070s, possibly completed by 1077 when the cathedral was dedicated.
The end of the tapestry is missing. The final scene (number 58) is headed Et fuga verterunt Angli (and the English left fleeing) and was added shortly before 1814 at a time of anti-English sentiment. 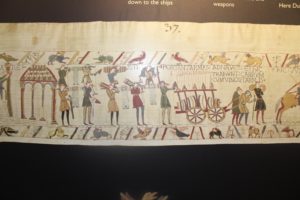 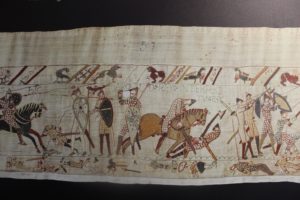 The Museum, opening times and tariffs

The museum is at 21 Allée des Augustines which is just off the rue de Nesmond.
Open
From 01/02 to 28/02 and to 01/11 to 31/12 : 9.30 am to 12.30 pm and 2.00 pm to 6.00 pm – note the lunchtime closing
From 01/03 to 31/10 : 9.00 am to 6.30 pm (to 7.00 pm from May to August)
It’s closed from the afternoon of 24th December afternoon to 26th December morning inclusive and also
from 31st December afternoon to 31st January 2019 inclusive.
Last admission 45 minutes before closing time
Full rate : 9,50 Euro
Reduced rate :7,50 Euro
Schoolchildren and Student rate : 5 Euro
Free under 10 years old
An audioguide is available in 16 languages : French, English, German, Chinese, Danish, Spanish, Hebrew, Italian, Japanese, Norwegian, Russian, Dutch, Swedish, Polish, Portuguese brazilian and Czech and is included in the price
Combined tickets for the Memorial Museum of the Battle of Normandy and/or the MAHB Museum of Art and History are available and can be purchased at any of the three museums. These museums give an insight into the preparations for D-Day and the subsequent battle and take you on a  journey through the history of European art. The website for the museum is here.

Climb the steps to this rather grand building and the two ticket desks are immediately inside. There may be a queue for tickets as it’s a very popular attraction. I’ve been a couple of times and been lucky not to have to queue though. Purchase your tickets and then present them and have your bag searched before joining the queue for the audio guide. Ask for the audio guide in your chosen language and it will be programmed for you. The room the tapestry is displayed in is fairly dark. The audio guide will start playing automatically as you enter the room. Each scene is numbered and the commentary references this as the events leading up to the Battle of Hastings is told. You can’t pause the audio guide so just keep moving in front of the large glass case. The detail of the tapestry is amazing and the friezes above and below each scene are fascinating. The audioguide lasts perhaps 15 minutes or so. As you exit the tapestry room into daylight, your visit isn’t yet finished.

Go up a flight of stairs to the main exhibition and wander round at your leisure learning about the tapestry and the story it depicts. There’s plenty to entertain adults and children alike.

Another flight of stairs (or the lift) leads you to a room where a 2D facsmilie of the entire tapestry is displayed. This really allows you to see the complexity of the stitches and the intricate details you may have missed. This floor also houses the cinema where a 16 minute film is played regularly alternating in French and then English. 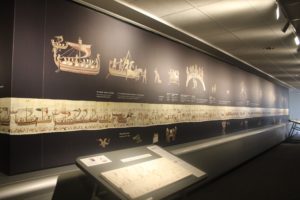 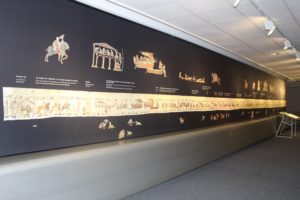 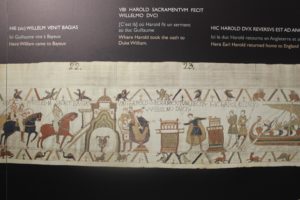 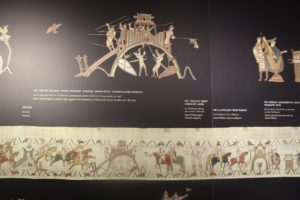 The scenes of the ships and the horses are particularly beautiful. Scene 57 (the penultimate one) shows Harold’ demise – killed by an arrow in his eye. Once you’ve watched the film you then return to the ground floor and exit via the shop if you’d like a souvenir. 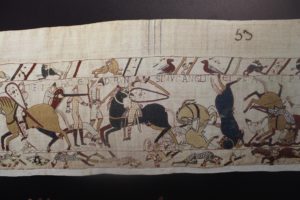 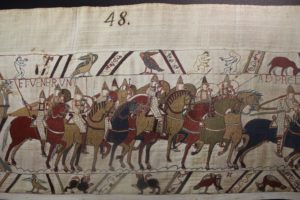 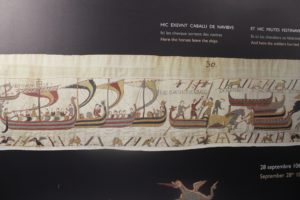 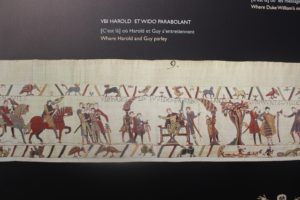 For a more detailed look at the tapestry this video, filmed in the room where the tapestry is displayed, gives a good overview. David Dimbleby describes the historical significance of the Bayeux Tapestry for his 2009 BBC One Series, Seven Ages of Britain here.